14.2.2020 - The Austrian Court of Audit (ACA) provides a comprehensive, nationwide analysis of the topic of care 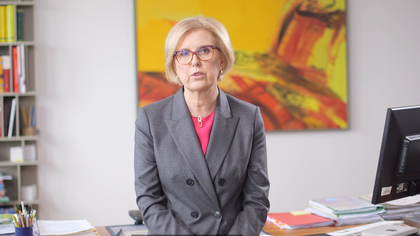 Transcript of the video on old-age care in Austria

With its report on old-age care in Austria, the ACA presents a comprehensive and nationwide analysis of the topic of care. The ACA assessed the effectiveness, the supply and the costs of care services. As regards the provision of old-age care, Austria is not sufficiently prepared for the demographic changes. The ACA notes the lack of a professional approach to business management indicators by the Federation and the provinces. Furthermore, the persons in need of care do not know what level of service delivery to expect in old-age care facilities.

Hitherto, Austria was lacking a comprehensive and nationwide statistical analysis regarding the costs of care services. For 2016, the ACA’s auditors calculated costs totalling EUR 7.9 billion for 452,688 persons in need of care, of which about EUR 2.9 billion were borne by the Federation and about EUR 2.1 billion by the provinces and the municipalities. EUR 2.9 billion were paid privately – this included own financial contributions, but also private care services valued in monetary terms, which were e.g. provided by family members.

The lion’s share of the EUR 7.9 billion is to be attributed to nursing homes (EUR 3.4 billion), followed by care services provided by family members (EUR 3.1 billion), mobile services (EUR 0.7 billion) and 24-hour care, which accounts for EUR 0.6 billion. The ACA criticises that the costs as well as the origin and use of the funds were not systematically documented. It therefore recommends to the Federal Ministry of Social Affairs, Health, Care and Consumer Protection and the provinces to ensure the recording of the relevant data.

Less family carers will be available

As depicted by the above-mentioned figures, a solid one-third of care services are provided privately – mostly by family members aged between 50 and 64.

In 2020, the ratio of persons in this age group to persons aged 80 and over was four to one. This means that a person aged over 80 can potentially have four caring family members. By 2060, this ratio will drastically change: a person aged over 80 will only have about 1.6 potential caregivers. Furthermore, societal developments, such as a higher female employment rate, could have implications on private care. The ACA points to the fact that the care services must be substantially expanded. This would require a nationwide coordinated demand forecast. The ACA recommends to the Federal Ministry of Social Affairs, Health, Care and Consumer Protection, the Federal Ministry of Finance and the provinces to carry out such a forecast. Eventually, an overall strategy on the further development of care services would have to be elaborated.

The ACA report reveals the differences in the supply of care services in Austria: while, for example, one nursing home place was available for around three persons aged 80 and over in the Graz-Umgebung District (Styria), the Krems-Land District (Lower Austria) had only one nursing home place for about 17 persons of this age group. The costs also varied widely: in Carinthia, for example, EUR 91 were charged per day for inpatient care in 2016, while in Vienna this amounted to EUR 161. An expansion of care facilities based on maximum values (density of nursing homes per district and costs per day) would result, compared to the minimum values, in additional costs of EUR 3.5 billion. This calculation concerns the year 2030.

Nationwide regulations with regard to nursing home tariffs and staffing are lacking. Furthermore, there are no nationwide applicable quality standards for nursing homes, for example with regard to professional caretakers, life quality as well as medical care and social support. Currently it is not clear which concrete level of service delivery can actually be expected in which care facilities. Based on the example of nutrition, the ACA illustrated to what extent the standards differ from province to province: the right to assistance in food intake, for example, is stipulated by law only in Vienna and Salzburg.

The costs for food were known in five provinces: in 2017 they amounted to between EUR 3.56 and EUR 5,98 per nursing home resident and day. The legal provisions for nutrition were – with the exception of Vienna – mainly drafted in general terms. Consequently, the quality of care in the nursing facilities lacked transparency.

No coordination between the Federation and provinces